A recent post in the Viewfinders Facebook group brought up the subject of flash vs natural light. This is indeed an “emotional” topic, with proponents and denigrators on both sides.

Personally, I take the view that light is light (I’m a physicist by degree), and – as a photographer – you need to be able to work with the light where it is and it’s perfectly acceptable to augment it, if you have to, by artificial means. After all, photography is itself an “artificial” process, but that does not mean to say we cannot turn nature to advantage…

As a response to the discussion I posted a very brief description of a photo shoot I had done that very day. “Portraits, outside. Using flash.” Yep… Here is the set-up. 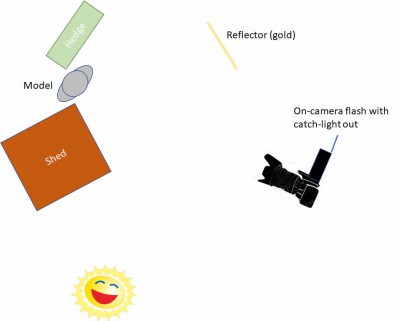 A bright sunny day, so the model needs to be in the shade somehow. A garden shed provided shade and, actually, quite a nice and rustic setting for the shot. A hedge in the background gave a contrasting plane behind the model, who was peeping out from behind the shed.

Knowing that, without intervention, this arrangement would look a little dull, I got a trusty assistant to hold a gold (for warmth) reflector to illuminate the subject. This gives some directionality to the light, so a nice level of contrast to the general picture.

To be sure that there are nice catch-lights in the oh-so-important eyes (used as the target for manually selected, centre-point auto-focus), I use a flash. Not pointing at the subject – that would be too much here: we don’t want to interfere with the natural illumination – but at 90 degrees, using the little pop-up catch-light card in the flash itself. This creates just enough of a bright source to give a specular reflection on the eye, without actually changing the illumination much (if at all).

Another problem in settings like this is colour temperature. Portraits in the shade on bright sunny days have quite a cold, bluish cast (the light source is in effect the beautiful blue sky). Selecting a “Shade” pre-set colour balance can help, but given the context I wanted quite a strong, warm glow on the subject: hence the choice of a gold reflector.

However, the “shadow” side of the face is illuminated by the diffuse light from above and behind. So, it was darker (no issue really), but also rather blue. The light source illuminating from behind was of course the sky, which makes for a quite dowdy-looking shadow-side of the face. Given time (and a very patient model), I could have gone back and set up (for example) a remote triggered flash with suitable gel to fill in from behind, and adjusted it to cancel the blue shadow light and lift the level of the “dark side of the face” some (phew!), but that would have really been trying the patience of the model. This kind of tweak is faster and easier to do “in post”.

So, into Capture One Pro. Basic adjustments done (very few – just limit a slight blown-out highlight on the sliver jacket, really), a mask applied to the “too dark” areas of the face to lighten it a little and, using the same mask, the colour-temperature shifted towards the red to provide just enough compensation to do the job. 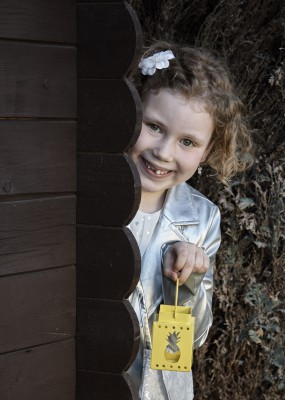 Other adjustments: A small scar on the face removed using the “spot removal” tool, which is great for quick fixing such things (it seems that little angels can fall off bicycles sometimes, too), plus some bird poo on the shed removed by cloning a piece of the shed over itself, and some “clarity” tweaking to taste. Out of 50 shots in this short shoot, 8 were selected by the client. Total selecting/processing time a little over 30 minutes together with the client, who took away the JPEGS exported from Capture One Pro in two resolutions on a USB stick. Job done.


Out and About with McCurry

Went to see the Steve McCurry exhibition on a day off recently. Of course, took my camera with the “nifty 50” fitted, and a B&W memory card… Excellent expo by the way – a must-see.


Oh I do like to be beside the sea-side…

… as the old song goes. it’s true, I do. The Belgian coast is highly commercialised, comprised almost entirely of promenade and apartments overlooking the north-west facing beaches, but I find it a lovely escape from the city once in a while. Beach huts are an ubiquitous feature of many holiday resorts, and they always (go on, admit it) ask to have their photo taken. Putting them next to some other items reminiscent of a sea-side visit is also fun (well, I think so…)…

Not posted much lately… The usual excuse – too much work. So, a holiday break gives some time to be lazy (mostly) or do other things (some of the time). Like go for walks around and see things around town.

In Brussels, the “Botanique” (Kruidtuin, or “herb garden” in Dutch) is a renowned and revered centre for cultural activities. It’s concert-hall hosts pop/rock concerts (it’s the French-speaking community’s colleague of the Dutch-speaking one, paradoxically called “Ancien Belgique”. Did I mention that such playful paradoxes are one of the reasons I love Brussels?). It also has a gallery often used for photo exhibitions. Top-class ones too! Went to see Alex Webb’s “The Suffering of Light” exhibition there recently. And of course couldn’t resist photographing the lovely building, it’s gardens and view over part of the city. 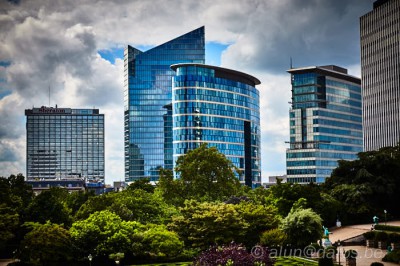 I used to work in that blue, oval-cylindrically shaped building that modestly calls itself “Covent Garden”. The pointy one in the background – third tallest building in Belgium, apparently – was once a financial temple, owned by a now defunct bank but renamed after the financial crisis in 2012 to reflect the name of the square it’s on – “Rogier Tower”. And I’ll be organising quite a big event in that hotel on the left fairly soon, too…

Love this city, despite all its faults…


Portraits in the style of…

Here are some more portraits. I get to take pictures of people in the office, for our web site and other things, and from time to time it’s nice to get into some of them and make something a little out of the ordinary. These two ladies were kind enough to allow me to show the results to the world…

In 2015, the Viewfinders club organised an exhibition at the “Halles Saint-Géry” / “Sint Gorikshallen” in down-town Brussels. As kind of “chief organiser” I came up with the theme – “Brussels – A Love Story”: an opportunity to show that our members – Belgians, ex-pats and immigrants alike – know something more than the average about this city we call our home.

March to April 2016, we re-ran this exhibition, with some additional images, at the “Gasthuisberg” hospital in near-by Leuven. Gasthuisberg is huge – we hear numbers of between 10.000 and 20.000 people there – making it bigger than some towns in the area! Our display there – some 58 photographs printed using the beautiful “Chromaluxe” process – seems to have been well appreciated! One of my pictures – below – was donated to the hospital when we took down the exhibition at the end of April. 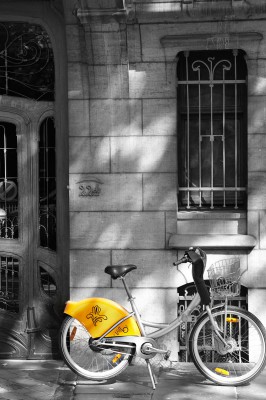 I called this picture “Villo Nouveau”. It was taken while on a bike ride around Brussels using one of the rent-able city-bikes – the one in the picture. It’s parked outside the “Hotel Solvay” on the Avenue Louise / Louizalaan, which is not only a UNESCO World Heritage monument, it’s also a wonderful example of art-nouveau architecture – like the stylised iris flower that is the emblem of Brussels.

Little did we know when we designed this exhibition that our beautiful city would soon be in such need of a great deal of total loving care… I hope our exhibition – a love story in quite a pure sense – can help in some way.

Though the physical exhibition is now finished, you can still see the images on the “virtual exhibition” web-site at http://www.dafos.be/HSG2015-LEUVEN2016/index.html .

I won a prize!

I submitted this picture for a Viewfinders Club Challenge, as a print. Being a B&W photo I had worked hard on to get that rich black silhouette look, it was just crying out to be a print. 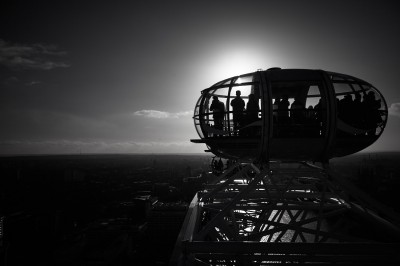 I got some really helpful critique from the judges, too.

Actually, the winning print aside, that was among the best “Challenge” meetings we’ve had at Viewfinders. Judges Bart Ramakers, Tim Buelens and Steven Johns (google ’em, or look them up on Facebook), and a whole bunch of Viewfinders members who’d sent in some crackin’ images really made it a night to remember…

… have words to thank for their positions… To quote “the Police”.

Pictures speak thousands of them, so they say (but then, they say so much…), and this is supposed to be a photo blog so some pictures may be a good idea.

The picture at the top of this page is of the “Kurzaal” (Casino) in Oostende – self-declared pearl of the Belgian sea-side. And I think it is – I really enjoy going there. Good places to get out and take pictures, too. 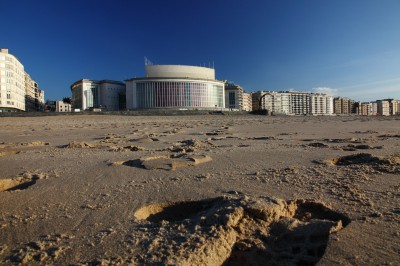 (the sky really was that colour, though a polariser helps !)